Working on some new stuff for the "Disposable Income"- an art collector event in central Florida. These few works are a continuation of street scenes painted/drawn with gouache and ink. With this series, I'm using a bit more colorful pallet and instead of crosshatching, I'm playing with line values and strokes. 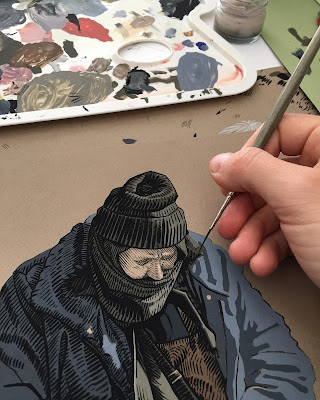 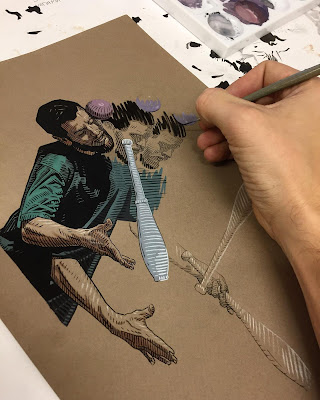 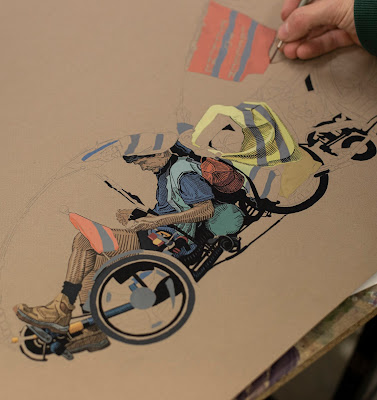 I have wanted to write a bit about this blog, my work, progress, and different direction for some time now.
Last year was kind of rough. I had some crazy bad experiences with a few festivals which made me rethink all this "street art" thing. It also inspired me to reflect on all that I've done to this point and where my focus should be in the future.
This doesn't mean I will stop painting murals at the festivals or in general.
Not being placed in a certain box, and avoiding labels has always been the main reason I loved painting outside. If I wanted to do a more realistic or more illustrative piece or even try something different, no one was there to say "Hi, but that's not what we know you for so don't do that. Do what we like". Usually, that is what galleries do, but there are more and more organizations that have this kind of approach in the "urban art scene". I would like to point out that my experiences with galleries in the past two years were only positive. A lot of "street art" projects are being funded by the city and might have deals with tourist agencies, so sometimes, the mural artist just ends up being a hand for their propaganda. Not always, but on some occasions. It is a good thing that people have embraced this type of art and now it is easier than ever to paint a big wall not worrying about prejudice and being accused of destruction of property (even if you had permission to paint). Mural festivals can hardly work without sponsors and the more money a certain project has the higher quality it gets...at least that is how it should be, and I have nothing against that. A lot of people that are involved in this type of organization are my friends, and I'm aware of how hard it is to get something started and how much effort it takes to organize a big event.
I just think that the people who are invited to a certain project are not there to please the sponsors or make a tourist commercial for the city.  That then becomes a commercial/ commission job that costs much more than what the fee is for doing "your own thing".

My own thing:
Looking at some earlier works, I can see a lot of bad decisions, some compromises, and not the best approaches, but I'm happy they were made. After all, "More is lost by indecision than wrong decision" as Cicero so eloquently put it a long time ago.
Lately, I'm spending my time in my studio working with oil, gouache, and aquarelle so that I can completely transit from spray to brushes. No, that doesn't mean I will stop painting with spray or totally change what I do.  I just want to expand my skill set so that I can work more freely without relying on just one medium (and the quantity of it), especially if I'm painting outside my home town.
I'm also interested in developing/ exploring different palettes, working on my brushstrokes, and avoiding total rendering. With spray, it is much easier to render and make smooth transitions, but if the whole piece is like that, it can look boring. It is also fun to try out new mediums and see where they take me. Repeating the same trick dumps me down and makes me not want to paint anymore.
I could continue writing this part but I'd rather leave the future works to speak on their own.
In some future posts, I would like to write a bit about influences ( adopted art parent and inspirations and a shout out to some contemporary artists whose works make me continue to work and evolve.
It might seem unusual to see this type of text, but I just had to throw it out. Having it all written here will make me work more but also stand my ground if the situations similar to the ones from the last year occur. Let's hope they won't.

Peeling off layers of wrong influences and mistakes can hurt, but it makes more room for healthier growth.